The Jacobin Show: The Year of Racial Reckoning 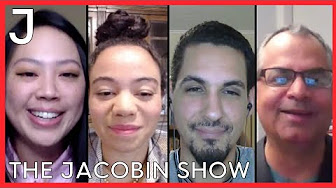 The Jacobin Show is a brand new, weekly YouTube show airing at 6pm ET that hopes to focus on a core theme in each episode – in contrast to the Jacobin Foundation’s sister show, Weekends, which is much more news-oriented.

The hosts – Jen Pan, Ariella Thornhill, and Paul Prescod – kicked off the episode a little cliché (was I watching CNN?), but they soon got rid of their nerves, found their stride and produced a really nice program. Although they are all co-hosts, it was clear that they divided up roles: Pan led the direction of the show as the main host, Thornhill made the show lighter and more friendly via her deadpan humor and articulate responses, and Prescod developed solid questions as an interviewer.

Honestly, the choice of guest for this show is what really attracted me. Generally, I’m much more of a fan of the magazines Jacobin or Catalyst than I am of the videos they make, but I believe that Vivek Chibber is one of the best, most accessible American, Leftist thinkers out there right now.

Chibber is both an academic – a professor at NYU – and a stark realist that speaks clearly and understandably for amateurs like myself. Unlike many speakers who will use vocabulary that requires you to be part of the discourse, he lays things out bluntly for the Average Joe (or at least the Leftist-inclined Joe that holds a completely unrelated day-job).

I want to take a moment before reviewing the episode to say that it does bother me that Jacobin hosts their shows and video content on YouTube. It is somewhat telling of the state of the Left that in the same episode where tech entrepreneurs are criticized for using their vast amounts of wealth for lobbying, we are using the platform of probably the largest tech company to do so, ultimately contributing to that pool of wealth whether we believe so or not.

There are a number of other video-streaming services that could be used in its place. It might be harder to setup or you may need to pay for the services, but I believe it would be worth it. I understand the necessity to default to YouTube as Jacobin still might not have a large enough reader base, but as it grows larger, they should seriously consider changing platforms.

As a side note, maybe this is a call for software developers (myself included) with time on their hands to try to spin up something like Wikipedia dedicated to hosting and streaming video services for non-profits or educational purposes. It’d be a heavy undertaking, but then at least non-profits and schools wouldn’t have to use these monopolies.

The show kicks off with Pan prompting the others to discuss how the current “racial reckoning” in American is transformative. We all got so caught up in the the protests and movements of Black Lives Matter following the murder of George Floyd. It seemed that everything, from stores, to our work, to the apps that we use on our phones were calling for reform.

But Pan is weary of this transformation: it seems that what was a grassroots movement quickly turned into a movement of the liberal capitalism. Huge companies donated millions to “racial justice” initiatives and called for anti-discrimination policies.

The hosts immediately smile out of skepticism, and then try to pry apart what could be happening here. Thornhill believes that corporations are “changing the scope of transformation” and altering the original demands of the grassroots movements to a “corporatized” version.

Prescod says that we should not compare this current movement to the Civil Rights Movement or the Urban Riots in any way; it’s something entirely different if we look at its the composition. He even goes on to say that most of the protests have been majority White, indicating an extremely different movement than what we might be envisioning in our minds.

They naturally progress onto the issue of tokenism in the newly elected federal government. They think that real change is being hidden underneath the veneer of “diverse” officials and go so far as to accuse the Black political class as taking advantage of the movement. Pan brings up a NAACP member stepping down amid criticism of taking lobbying money for campaigning for the 2020 California Proposition 22 – which classified the workers of transportation and delivery companies such as Uber or Instacart as independent contractors, meaning that they were no longer eligible for employer-benefits like healthcare and retirement or even unemployment benefits.

Before bringing on Chibber, they comment how the Twitter founder gave money to an institution led by Ibram X. Kendi to research racial discrimination. They criticize this move deeply, believing that we already have a good set of policies to tear down discrimination and oppression; we don’t need more research, we need action.

The hosts bring on Vivek Chibber, an NYU professor and the editor of Catalyst. Chibber is clearly the star of the show and immediately dives into bashing the current state of the Left.

He makes a stark distinction between oppression and discrimination; he believes the Left’s focus on discrimination in recent years has been from pressure by the liberal, ruling elite and has torn the Left out by its roots. He says that the Left has essentially become “irrelevant,” because there is now the belief, instilled by the predominant, liberal ideology, that economic redistribution and discrimination somehow can’t go together.

He says that people on the Left, who mainly come from small bubbles today in wealthier neighborhoods, are accused of not focusing on discrimination like the good liberals do. We inevitably fold to this pressure and lose the focus that we should have on oppression and income inequality, and instead repeat the liberal focus on anti-discrimination, which does nothing to root out the real cause.

This downfall of the Left came out of the 80s with the rise of critical race theory. Things like “micro-aggressions” and innate prejudices are the new focus instead of widespread inequality. So the young Left essentially has to relearn what the old Left knew back in the 50s and 60s. We have essentially lost 60 years of thought due to the encroachment of liberal ideas.

He wraps up his section by contrasting the Left’s downfall with the rise of corporate America. But, the Bernie Sanders movement has changed people’s perspective of this. So all of a sudden, when the Black Lives Matter protests erupt across the nation, corporate America, which is under an onslaught by Sanders and a new wave of anti-corporation/anti-business sentiment, moves to use the movement to re-brand themselves in the public eye.

Now, instead of “robber-barons,” they are fighters for racial justice. They show their advertisements for justice, release anti-discrimination policies and donate to charities, but they refuse to acknowledge the real cause of the issue: the distribution of wealth. Now they can try to restore the legitimacy of the corporate community and push back the emerging Left that is growing within the Democratic Party.

This was a good inaugural episode for a new Jacobin show. My problem is that I usually only stick with their shows for the first couple episodes, and then drop off. I’m personally much more into the print magazines, which has beautiful designs and art. But, the next topics did sounds interesting and the hosts were fun to watch. Vivek Chibber took the cake like always though.