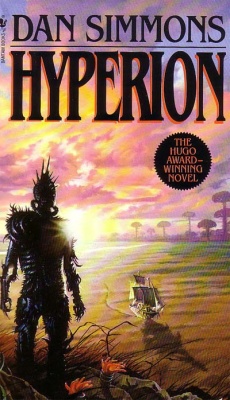 Hyperion is an intricate space opera that manages to blend detailed character development with an epic storyline. You will enter the minds of six intriguing characters as they recount stories from their past, each with its own distinct and beautifully crafted narrative. A complex universe is gradually unveiled and unified from completely divergent perspectives. What appears to be a pleasurable adventure story quickly turns ominous, as Simmons ropes you into his mysterious universe. Be assured that the change of pace is greatly welcomed, as the novel becomes a thrilling and creative tale about the world of Hyperion, leaving no surprise that it won the Hugo Award in 1989.

The book starts in medias res following a character named the Consul as he’s summoned aboard a spaceship for a pilgrimage to the world of Hyperion. It quickly becomes apparent that the Consul is not our heroic protagonist, but rather an elusive character with unclear intentions. He will simply be the eyes and ears that glue Simmons’ nonlinear narrative together.

The Consul is not alone on his pilgrimage, but is joined by six other characters also summoned to the Time Tombs of Hyperion to stand before the Shrike, some sort of deity according to the religion of Hyperion. As the pilgrimage is expected to take time, both traveling through space and across the landscape of Hyperion, the pilgrims mutually agree to share why they believe to be called before the Shrike.

Each story is a flashback, or set of flashbacks, that interrupt the linear structure of the novel. This architecture allows Simmons to demonstrate his spectacular storytelling by weaving together a universe simultaneously built from the past and present, and is how Hyperion really shines as a work of art.

Each chapter begins from the perspective of the Consul as the pilgrims move closer to the Time Tombs, and then recedes into the past as a character tells his or her story. Simmons unravels a completely unique storyline and writing style for each of the six stories, which can be labelled as follows:

Every story unravels a mystery of Hyperion and the Shrike deity, while simultaneously revealing the history of the Hegemony of Man, the singular human organization that has conquered humankind’s interconnected system of worlds. This independent story-based structure is the core feature of the novel, making it a compelling work, but also highlighting some of its weaker parts.

The poet’s story, although important for the understanding of the history of Hyperion, may become repetitive and even annoying at times. The story of the family seems too lengthy. The detective story, although one of the more thrilling chapters of the book, occasionally resembles a typical mainstream action/thriller novel. However, these minor setbacks do not take away from the overall quality of the book too much, and it is clear that each chapter is delicately thought-out. For example, during the poet’s story, he recounts part of his life in which he lost an entire half of his brain that contained all language functions, leaving him with a vocabulary of only 7 curse words:

“I TRIED TO explain this to my fiends on Heaven’s Gate. “Piss, shit,” I said. “Asshole motherfucker, goddamn shit goddamn. Cunt. Pee-pee cunt. Goddamn!” They shook their heads and smiled, and walked away. Great poets are rarely understood in their own day.

As is common among many epic space opera novels, there are a few large-scale themes that are explicit: the Hegemony of Man refers to the imperialistic regime of humankind. To instantaneously travel across accessible regions of space, the Hegemony developed farcasters in conquered worlds so that their citizens could travel, live and trade with their colonies. Simmons is obviously opposed to this nature of humans, as his tone towards this behavior can be read in various ways:

There is a group of humans called the Outsters, who are referred to as “barbaric” outsiders, where in reality they are simply an anti-Hegemony civilization. Simmons’ perspective of viewing another civilization as barbaric is explicit:

Barbarians we call them, while all the while we timidly cling to our Web like Visigoths crouching in the ruins of Rome’s faded glory and proclaim ourselves civilized.

Although these ideas of imperialism, colonialism and authoritarianism guide the overall storyline of the novel, Simmons does not dive into them to deliver a critical analysis of human nature or institutions, but rather skims the surface to set the stage for an epic saga.

Time as malleable and perspective-driven is a focus of the novel; the Time Tombs are flowing backwards though time, and the Shrike is able to control time in its presence. The characters allude to the idea that the Time Tombs and the Shrike were created by humankind’s future self as an atonement for their actions, lining up an even more epic space opera story that could span mankind’s entire existence.

Hyperion’s world-building is graceful, gradual and welcoming. Character development is natural, while the diverse narratives keep you delightfully entertained as Simmons’ creative universe is unveiled before you. It’s a thrilling action-packed space opera on an epic stage. That being said, if you are a fan of space operas, then Hyperion should jump to the top of your reading list. However, if the subgenre doesn’t spark your interest, Hyperion might persuade you differently, but you shouldn’t drop everything to read it as it’s a quintessential space opera. Either way, the first novel of the saga concludes nicely with enough suspense to drive you to the next book.