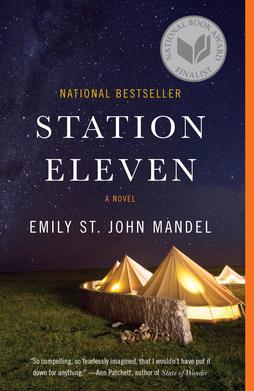 Station Eleven is a modest speculation on the way culture would transform after a pandemic eradicates the majority of human population. Emily St. John Mandel composes a narrative that blends stories from various characters before and after the collapse of civilization. Although the novel exhibits sharp commentary on modern life and offers an intriguing prediction of what would become of society, the very setting of the novel—a pandemic that wipes out civilization—has been beaten to death in recent years. At times, the novel feels stale, repetitive, and peppered with clichés. Despite these drawbacks, Mandel’s writing is to be appreciated, as it portrays a thought-provoking post apocalyptic world and what could become of society.

The story opens focusing with a paramedic witnessing the actor, Arthur Leander, having a heart attack on stage during a production of King Lear. In vain, he jumps on stage to save him, yet does not succeed. The perspective shifts to a group of workers at the theatre discussing Arthur’s death, and sadly if there is any family that needs to be notified. Yet once more, the perspective abruptly switches, this time to an omniscient voice that foreshadows a disaster:

Of all of them there at the bar that night, the bartender was the one who survived the longest. He died three weeks later on the road out of the city.

During the early chapters of the novel, Mandel builds a decent amount of suspense around the imminent outbreak of the Georgian Flu. However, it slowly dissipates after the pandemic’s outbreak, where the story begins to focus on the Traveling Symphony—a group of survivors that have banded together to travel between cities and towns to perform Shakespearean plays. At this point in the story, the post apocalyptic world is presented mainly by Kirsten, one of the child actresses who was in King Lear the night that Arthur Leander died on stage, now in her twenties and travels with the Symphony.

You go on to learn that the main characters in the story are in some way related to Arthur, being family, friends or somebody influenced by his work as an actor. Mandel slices up the tale by blending stories from before and after the apocalypse from the perspective of a variety of characters, composing an elaborate non-linear structure that is clearly one of the highlights of this work.

To be sincere, a novel about an apocalyptic pandemic that provokes the collapse of civilization is far from innovative. It is riddled with clichés, from typical scenes of cars piled up on highways with dead bodies inside, to frightened quarantined travelers stranded in an airport. Although there is a lack of imagination for the setting of the book, Mandel does surprisingly well at constructing a theoretical future through character-driven narratives. Without diving too deep into the details of apocalyptic events, Mandel crafts the future of society and civilization slowly through the eyes of her relatable characters.

In the initial years following the pandemic, the fear instinct and lack of trust resulted in a dangerous and violent world. Gradually, people began seeking out small communities: some attempted to live in peace and revive parts of the old world, while others devolved into pseudo religious cults, establishing authoritative communities dangerous to outsiders. Unfortunately, another cliché surfaces and drives the last half of the story: a fanatic, crazed leader called the Prophet comes in direct conflict with the Traveling Symphony.

Mandel’s post apocalyptic world leads to a number of open-ended questions that are not addressed in the novel. Why would society devolve so quickly? It is assumed that in a post apocalyptic world, almost all technology would be rendered useless by the loss of electricity. This in not inherently incorrect, but it’s simply not debated or reasoned through at any point in the novel. Would it really take so long to rebuild useful technologies given the vast amount of published and accessible knowledge?

Clichés and plausibility aside, Mandel has an excellent control of language. She is wonderful at capturing and adding subtle commentary to everyday events:

“Clark? Heller here.” “So I gathered,” Clark said. There was something obnoxious, he thought, in people who introduced themselves by their surnames while calling one by one’s first.

These lovely commentaries can be found throughout the story, comparing Mandel’s speculative society to our current one:

No more Internet. No more social media, no more scrolling through litanies of dreams and nervous hopes and photographs of lunches, cries for help and expressions of contentment and relationship-status updates with heart icons whole or broken, plans to meet up later, pleas, complaints, desires, pictures of babies dressed as bears or peppers for Halloween. No more reading and commenting on the lives of others, and in so doing, feeling slightly less alone in the room. No more avatars.

Lastly, her descriptions of landscapes are wonderful:

Miranda opened her eyes in time to see the sunrise. A wash of violent color, pink and streaks of brilliant orange, the container ships on the horizon suspended between the blaze of the sky and the water aflame, the seascape bleeding into confused visions of Station Eleven, its extravagant sunsets and its indigo sea. The lights of the fleet fading into morning, the ocean burning into sky.

Even though there are apparent drawbacks to the novel, it is provocative, thrilling at times, and simply an entertaining read. Mandel creates approachable characters that drive a speculative narrative about a post apocalyptic civilization. There are witty and insightful commentaries about modern society, though Station Eleven is missing a layer of critical observation that we get from great speculative fiction.