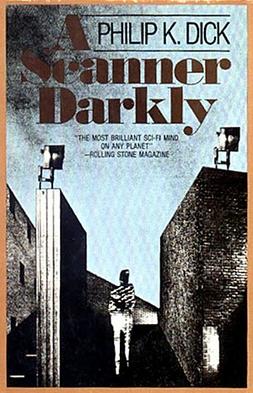 By Source, Fair use, Link

A Scanner Darkly is a somber narrative that looks into the psychological and socioeconomic effects of drug addiction. Although the story itself falls somewhere on the spectrum between crime and science fiction, how drug abuse affects cognition, perception and ultimately the well-being its users is the focal point of the novel. The casual reader should shy away from this book unless they are interested in these topics, or have previously read works by Philip K. Dick and have an understanding of his background and style. That being said, if the reader meets this criteria, or has a desire to dive into something radically different, A Scanner Darkly will be a genuine addition to their repertoire. PDK – a common abbreviation of the author’s name – drew from the darkest parts of his own experience to explore drug abuse within an entertaining science fiction novel, that although might not aesthetically appeal to everyone, will remain a pillar of his writing and life. As he stated in this interview:

Fitting for the genre of science fiction, PKD concocts a new psychoactive drug called Substance D, also referred to as Death, that causes the left and right hemispheres of the brain to work independently of each other, altering consciousness, perception and understanding of oneself. Bob Arctor, a seemingly run-of-the-mill type of guy initially, in fact lives with with a set of irrational drug addicts. He’s in love with a woman named Donna, who is a cocaine addict and drug dealer. Much of the first half of the novel revolves around Arctor attempting to escape the loony bin in which he’s living in order to go see Donna. It feels like nothing drives the storyline at this point, focused instead on the senseless ramblings of the main characters, which itself seems to be a delicate play on the life of a drug addict.

The story also follows the perspective of Agent Fred, a detective who has bugged the house with holo scanners, some sort of surveillance device, and attempts to discover who are the dealers of Substance D. With the help of a scramble suit he can enter into the addict’s house disguised as a user. His colleagues at the station, who also see the surveillance footage, are unaware of his real identity. They ask him why he would do this type of work:

It isn’t worth it, this work, he thought. There isn’t that much money on the fucking planet. But it wasn’t the money anyhow. “How come you do this stuff?” Hank had asked him. What did any man, doing any kind of work, know about his actual motives? Boredom, maybe; the desire for a little action. Secret hostility toward every person around him, all his friends, even toward chicks. Or a horrible positive reason: to have watched a human being you loved deeply, that you had gotten real close to, held and slept with and kissed and worried about and befriended and most of all admired—to see that warm living person burn out from the inside, burn from the heart outward. Until it clicked and clacked like an insect, repeating one sentence again and again. A recording. A closed loop of tape.

Fred’s character drives the main storyline of the novel, as he gets closer and closer to discovering who is selling Substance D. But he loses grip on reality, and plunges into a series of conflicts that PKD resolves eloquently.

The useless, deranged, yet sympathetic drug addicts are the focal point of the novel. PKD explores their thoughts, actions, paranoia, past and future. He attempts to epitomize the life of an addict into a short book and doing so in a compelling manner. He draws a very fine line between comical absurdity and scary realism. At any point in time, PDK may depict the addicts as hilariously bumbling idiots who cannot take care of themselves, yet instantly drop into a frightening depiction of insanity and cynicism. This idea is exemplified in Barris, who is a truly sinister character:

“You poisoned me,” Arctor said savagely, his vision almost clear, his mind clearing, except for the fear. Now fear had begun, a rational response instead of insanity. Fear about what had almost happened, what it signified, fear fear terrible fear of smiling Barris and his fucking snuffbox and his explanations and his creepy sayings and ways and habits and customs and comings and goings. And his anonymous phoned-in tip to the police about Robert Arctor, his mickey-mouse grid to conceal his real voice that had pretty well worked. Except that it had to have been Barris. Bob Arctor thought, The fucker is on to me.

No PKD novel would be complete without passionate commentary on industrial America. He does so through the surprisingly acute self-awareness of the addicts:

He didn’t look forward to that, so he continued to loiter and delay, going nowhere, going everywhere. In Southern California it didn’t make any difference anyhow where you went; there was always the same McDonaldburger place over and over, like a circular strip that turned past you as you pretended to go somewhere. And when finally you got hungry and went to the McDonaldburger place and bought a McDonald’s hamburger, it was the one they sold you last time and the time before that and so forth, back to before you were born…They had by now, according to their sign, sold the same original burger fifty billion times. He wondered if it was to the same person. Life in Anaheim, California, was a commercial for itself, endlessly replayed. Nothing changed; it just spread out farther and farther in the form of neon ooze. What there was always more of had been congealed into permanence long ago, as if the automatic factory that cranked out these objects had jammed in the on position. How the land became plastic, he thought, remembering the fairy tale “How the Sea Became Salt.” Someday, he thought, it’ll be mandatory that we all sell the McDonald’s hamburger as well as buy it; we’ll sell it back and forth to each other forever from our living rooms.

The addicts try to escape their situations, but the world keeps driving them back downwards:

Justice and honesty and loyalty are not properties of this world, she thought; and then, by God, she rammed her old enemy, her ancient foe, the Coca-Cola truck, which went right on going without noticing. The impact spun her small car around; her headlights dimmed out, horrible noises of fender against tire shrieked, and then she was off the freeway onto the emergency strip, facing the other direction, water pouring from her radiator, with motorists slowing down to gape.\nCome back, you motherfucker, she said to herself, but the Coca-Cola truck was long gone, probably undented. Maybe a scratch. Well, it was bound to happen sooner or later, her war, her taking on a symbol and a reality that outweighed her. Now my insurance rates will go up, she realized as she climbed from her car. In this world you pay for tilting with evil in cold, hard cash.

As a standalone novel, A Scanner Darkly is exciting at times, but difficult at others. Within the context of PKD’s work and life, however, the book is a great addition to any aficionado of his writing. It has innovative science fiction concepts, biting critiques on industrial America and a plot that has a classic PKD twist. Although I wouldn’t recommend A Scanner Darkly as an entertaining novel to the common reader, I will cherish it as a great addition to the works that have expanded my horizon of knowledge.