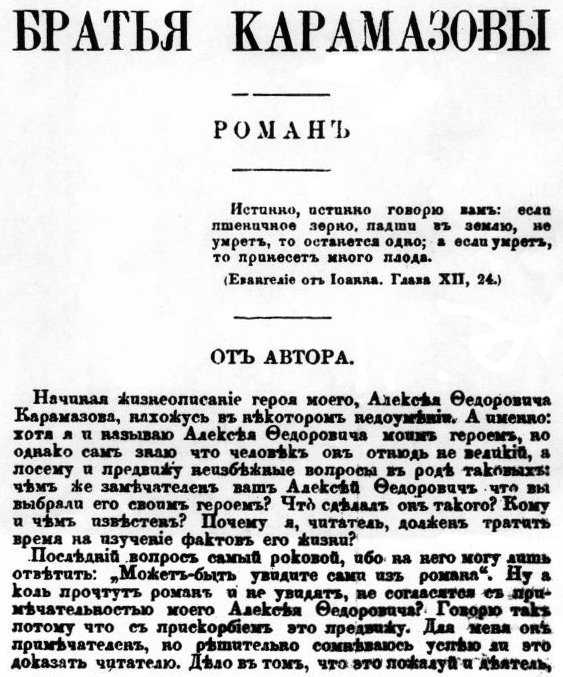 The Brothers Karamazov is an immense novel buried beneath layers of disproportionate language and religious symbology that takes place in an unfamiliar 19th century Russian countryside. Though if the 21st century reader makes the effort to dive into its historical context and appreciate Dostoevsky’s tough writing for what it is, a remarkable story emerges that explores the ethical and moral questions of injustice, hatred, love, and the fundamentals of human nature. The Brothers are each lovable characters in their own way, pulling us down into their charming absurdities, which makes Dostoevsky’s challenging and lengthy writing much more pleasurable to read.

There are two crucial aspects of the novel’s design that stand out:

The first aspect is essential as it helps to explain the novel’s length and seemingly weak transitions between chapters. By publishing it in pieces over the course of a year, it makes sense that descriptions sometimes feel excessive, as Dostoevsky was building a world into which his readers could immerse themselves upon every publication. It also makes sense that chapters can feel so independent from one another, as each chunk of writing was intended to convey a message while adding to the fundamental themes of the book. By reading the novel in its entirety today, a degree of patience is needed to appreciate it.

The second aspect is also essential as it is necessary to consider who is speaking at any moment. Is it the narrator who comes with prejudice? Is it Dostoevsky? Is it meant to be satirical at times, or even to lead us astray? The narrator leaves out the single most important event of the story, simply because he does not know what happens as he was not present when it occurred, making us wonder what parts are true and what parts are his opinions. It is a compelling literary technique and is pulled of spectacularly.

Each member of the Karamazov family – a father and his three sons – are so different from one another that at times they seem too allegorical. The youngest is pious and looking to better the world, the middle an intellectual nihilist and atheist, the oldest a brash seeker of pleasures and emotions, and the father a neglectful and cruel man. In isolation, their actions and emotions seem lofty and unrealistic, but together they form a family to which we can all relate. This is not to say that we personally have family members like the Karamazovs, but that their personalities can be found in pieces in the people around us.

The narrator’s focus is on the Karamazovs, who are all wealthy men. Servants, peasants, and women are depicted as secondary characters, often ridiculed or shunned in some sense. As stated above, it is important to understand who is telling the story. The narrator seems to come from the upper-class, and obviously has negative views towards the lower classes. Dostoevsky writes satirically, yet assures that his more progressive views are portrayed as well:

But later on I learnt with astonishment from medical specialists that there is no pretense about it, that it is a terrible illness to which women are subject, specially prevalent among us in Russia, and that it is due to the hard lot of the peasant women. It is a disease, I was told, arising from exhausting toil too soon after hard, abnormal and unassisted labor in childbirth, and from the hopeless misery, from beatings, and so on, which some women were not able to endure like others.

Narrator: “Can a Russian peasant be said to feel, in comparison with an educated man? He can’t be said to have feeling at all, in his ignorance.”

Peasant: “For our children – not your children, but ours – the children of the poor gentlemen looked down upon by every one – know what justice means, sir, even at nine years old. How should the rich know? They don’t explore such depths once in their lives.”

Store clerk: “What’s it to do with me? Throw away your money, since it’s cost you nothing.”

The allegorical manner in which Dostoevsky constructs his characters allows him to contrast them to produce moral, ethical and other philosophical dilemmas. How can people who are so flawed judge others? How do we determine what constitutes a crime? Do characters who are influenced so strongly by their environments from youth have free will? Can they achieve redemption?

“Brother, let me ask one thing more: has any man a right to look at other men and decide which is worthy to live?”

“Why bring in the question of worth? The matter is most often decided in men’s hearts on other grounds much more natural. And as for rights – who has not the right to wish?”

They are heavy questions for a heavy book, though the reasoning that Dostoevsky follows tends to have strong religious undertones. Given the time period and place the novel was written, as well as Dostoevsky being Christian Orthodox, it makes sense that these moral dilemmas are approached within a religious context. A great example of this is the chapter, The Grand Inquisitor, where the atheist brother, Ivan, debates the notion of free will in relation to the Catholic Church and the return of Jesus Christ with his religious brother, Alyosha.

The father is a cruel, despicable man. But does his murder give the brothers freedom? Is the crime of the brother’s free will, or were they pushed to the edge by a manipulative father? The dilemmas that Dostoevsky poses are rigorous, as is his reasoning, though it may be foreign to a non-Christian reader. He leans heavily on religious doctrine, symbology and interpretation that is often hard to follow. Although it is a great historical piece that is surely filled with strong arguments for the reader educated in this context, others may leave the text confused and slightly unsatisfied with the answers. Then again, do books ever answer life’s most difficult questions the way we expect, or do they just provide us new avenues to contemplate them?

My interpretation of The Brothers Karamazov is one of the common reader, somewhat familiar and entirely unknowledgeable about 19th century Russian literature. For me, there were slow and dry parts with language that made uncovering meaning laborious and challenging. There were also incredibly intriguing parts that will stick in my mind for years to come. It is clear how Dostoevsky influenced modern thought through an array of moral and ethical questions and meticulous reasoning. If you are interested in how Christian humanism and its arguments are stacked against Atheistic ideas of the time, The Brothers Karamazov will thrill you. If you are in search of a classic novel to immense yourself in, it will probably satisfy you as well. For me, I’m happy to have read it, though it is not something that should be picked up off the shelf lightly.

“That’s just the point, that ‘but’!” cried Ivan. “Let me tell you, novice, that the absurd is only too necessary on earth. The world stands on absurdities, and perhaps nothing would have come to pass in it without them. We know what we know!