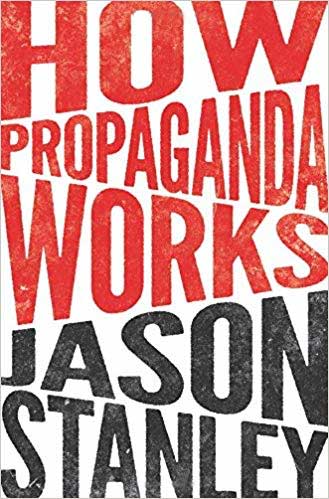 The fact that there is no neutral stance cannot lead us to political paralysis, or to skepticism about political and moral reality.

How Propaganda Works is an eye-opening book that rigorously defines, describes, and identifies propaganda in modern democracies. We can easily conjure up stereotypical examples of propaganda, namely black and white videos of Hitler’s speeches or colorful, war-time posters inviting young men to join the army. In recent years, however, propaganda has learned to disguise itself more effectively. Jason Stanley seeks to pull back its mask and provide us with the tools necessary to build sound arguments against this enemy of reason.

Propaganda’s appeal often relies on the simplicity of its arguments. Identifying propaganda and presenting a logical counterargument takes much more work. Although this book is intended for every audience – and should be read by every audience – Stanley demands a certain level of concentration. He simplifies complex arguments to make them approachable, but there is only so much magic that he can work. Understanding propaganda will demand the reader’s attention.

Each chapter looks at propaganda from a different lens; the early chapters take a more historical and scientific perspective, while subsequent chapters take a more philosophical and ideological perspective. Stanley’s arguments can be difficult to keep up with at times, but he will always come back around to provide the reader with an easily understandable summary. Take the following summary on ideology as an example.

Using Max Weber, I argued that elites in civil society invariably acquired a flawed ideology to explain their possession of an unjust amount of the goods of society. The purpose of the flawed ideology is to provide an apparently factual (in the best case, apparently scientific) justification for the otherwise manifestly unjust distribution of society’s goods. I then argued that, as a mechanism of social control, the elite seek to instill the ideology in the negatively privileged groups. By this route, the negatively privileged groups acquire the beliefs that justify the very structural features of their society that cause their oppression. I then laid out some very general psychological and epistemological facts that make it plausible that such efforts will be successful. The ideology of the elites is the flawed ideology.

Language is the primary mechanism by which propaganda circulates – at least the form of propaganda that Stanley is most interested in here. He therefore dedicates a large part of the book to linguistics and the philosophy of language. He describes propaganda not as a single, unique thing, but as a composition of several components. One of these components is the content model of propaganda.

Propagandists seek to retain reasonableness (or any other deliberative ideal) at the level of assertion, but violate reasonableness at another level.

To combat the use of the racial slur, a person would have to stop the conversation. They would have to concede ground to the propagandist by saying the statement is factually correct, but that the racial slur is inappropriate. Propagandists know this, and they seek to maintain a common ground with their listeners. They will often use a slur that conveys their opinion of a certain group, but that remains within a minimal level of reasonableness. Stanley uses “urban youth” or “inner city” as classic examples of this phenomenon. Because these terms are politically correct (questionably), propagandists will use them to disseminate a biased opinion without violating reasonableness at the level of assertion.

As we have seen in previous chapters, the distinctive danger of propaganda in a liberal democracy is that it goes unnoticed. It is hard to think of a better way to exhibit this distinctive danger than by reflection on the fact that philosophy professors in liberal democratic societies assume that there is a distinctive and easily identifiable class of words the function of which is to decrease reasonableness, which have this effect wherever they occur in a sentence.

Language is deeply tied to social hierarchies. Obvious examples of this are using “Yes, Sir” or “Yes, Ma’am” with older folk or even changing the form of a request at work depending on its recipient; an email to the CEO will be much more elaborate than a message sent offhandedly to the intern.

A homeless, penniless man from Appalachia cannot give commands to managing directors on Wall Street. For the same reason, he cannot engage in speech that has even the possibility of successfully establishing a preference ordering among worlds that ranks him higher than managing directors on Wall Street. Nor can he make assertions that can function as commands; his proposals to add things to the common ground can never, given his lack of practical authority, rise to the point of being tellings. This is the problem of authority, which has received much discussion in the literature on subordinating speech.

A serious issue with authority is that it can obscure truth and reason.

…the psychology of persons is not naturally suited to pursue autonomy, either of belief or of action. These are the well-known results of the Yale social psychologist Stanley Milgram in the 1960s. Milgram’s large body of experimental work on obedience to authority provides strong evidence that the assertions of authority figures are accepted even in the face of explicit countereevidence.

Ideologies are irrational. They may be held by either the most educated or the most uneducated.

The reason why a belief is resistant to rational revision is because of structural features of the society in which the agent is located.

A commonly held ideology is that United States is a country with high social mobility, where hard work and determination can raise an individual to a higher class. Global statistics have constantly shown this statement to be false, but the belief runs through the very structure of our society.

If there are social injustices, a policy seeking to address them is reasonable. But it will be treated as unreasonable, in a society committed to an ideology that there are no social injustices. Claims that contribute to injustice will fail to be recognized as such. In short, demagoguery will be effective.

Those opposed to welfare policies will often paint a picture of the hard working farmer or the small business owner who bootstraps himself out of poverty through determination. They will depict “urban” drug-addicts as overloading the welfare system and raising the taxes of hard working people. These emotional anecdotes prey on the flawed ideology of a “meritocracy” that runs through our society. Well meaning people will easily be influenced by this form of ideological propaganda.

A goal of this book is to provide an argument for equality by showing that one central cause of effective propaganda is inequalities, both material and political.

Stanley’s argument for equality is not based on moral superiority – although he clearly believes inequality is wrong – but is based on the logical deduction that inequality damages the fundamentals of democracy.

We began this book with Martin Delany’s argument that failures of equality of attainment lead to failures of equal respect by causing the false belief that those who control less of the resources are inferior (as well as loss of self-respect by the negatively privileged groups). But the book’s argument against inequality is not that failures of equal respect and the undermining of the self-respect are a moral harm (which they no doubt are). It is rather that the beliefs that enable these moral harms are particularly democratically problematic, because such beliefs make antidemocratic demagoguery effective.

In societies with large inequality gaps, such as ours truly, inequality will morph into a terrifying form of elitism.

In conditions of significant inequality, such as large differences in the distribution of society’s resources, those who benefit, the elites, will have certain perceived epistemic advantages over the negatively privileged group, an advantage that will manifest, as we have seen from Langton, in practical terms. They will employ their epistemic and practical advantage to claim expertise of issues of value, which are in fact beyond the domain of expertise. They will use their presumed expertise and control of the resources to set the agenda for the media and the schools as methods of applying and conveying their own ideology.

Stanley argues that the “expertise” of the elites has devolved into a grotesque form of propaganda: technicism. Data and statistics have taken on a sense of authority that, if employed by propagandists, become a threat to reason.

It is a flawed ideology, because, by denying us access to narrative accounts and personal testimony, it blocks us from an understanding of the human suffering that explains the statistics, even when the statistics are factually correct.

How Propaganda Works should be read by everybody who is remotely interested in language, philosophy, or politics. Stanley boils down his complex, philosophical arguments into easily understandable concepts for the common reader. Propaganda has become the dark forest we helplessly scramble through in our modern lives; Stanley’s book is a wonderful companion to guide us to reason.