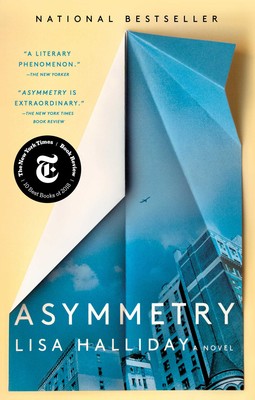 You can tell when someone is unbedeviled by time.

Asymmetry is a flurry of beautiful, comical, and somber ideas that are bound together by a mysterious force the reader must come to discover. Lisa Halliday’s debut novel sidesteps the structural norms of conventional fiction. There is no conclusion for her characters, no plot with a climax and resolution, and no theme that is immediately apparent. Instead, the reader must formulate their own interpretations of the novel as Halliday brings them along on a journey of thoughtful and elegant writing.

The novel is broken into three sections that take place at independent times and places.

The first section begins briefly after 9/11 and portrays a frivolous relationship between Alice – a young, aspiring writer – and a much older, Nobel Prize winning author – Ezra Blazer. Their relationship is unique; they are aloof, yet tender and kind, and understand one another despite the enormous age gap that separates them. The romantic veneer that coats the beginning of their relationship begins to wear away as real issues of social conventions, power, age, and aspirations get in the way. Ezra’s health becomes an issue for the couple as Alice becomes deeply unsure about herself, her writing, and her future.

The second section bounds across the globe and follows Amar – an American economist originally from Iraq – who is detained in customs while traveling through England to Istanbul, years into the Iraq war. He is stranded alone in customs during the holidays as he waits on bureaucracy. He contemplates his life. He remembers both Iraq and America before the war. He thinks of his brother – who stayed in Iraq to pursue a life of traditional ideals – and thinks of how that contrasts with his own life. Halliday wants us to think deeply about Amar and Iraqi life, but leaves a warning:

It perhaps might be said – if anyone dared – that the most worthless literature of the world has been that which has been written by the men of one nation concerning the men of another.

The last section of the story wraps around to a recorded interview with Erza some time after Amar’s detention. The reader anticipates references to Alice or Amar, but Halliday refuses to use traditional plot structures. Instead, she hides references to the past in Ezra’s responses.

And it is this same urge, this mania to tame and possess – this necessary folly – that sparks and sustains love.

What makes us so different that sparks attraction, hatred, love, and violence? Asymmetry is interested in exploring the crevices that separate us; it looks into age, wealth, prestige, cultural identity, religion, and a number of other biological and environmental factors that push us apart and bring us together.

Even when people come from the same background, walk through the same parks, pass through the same customs checkpoints, the situations they experience and the way they react to them are distinct. Amar and his brother grew up in the same home, but they ultimately took entirely different paths in life, leading them to different sides of the globe and “different sides” of the war. Ezra and Alice are both writers, but age, prestige, and wealth mean they experience very different aspects of the profession.

Alice and Ezra live in a world enveloped by the highs and lows of their romance. Amar lives in a very different world: one in which both of his countries are under war with each other. Whereas the war is so present in Amar’s life, it’s equally as absent in Alice’s and Ezra’s. Halliday doesn’t give any direction in how to think about this; she presents us with the characters and the setting and wants the reader to make the associations that most fits them. Each reader’s experience with these ideas will be entirely unique.

Alice, whose blue sandals matched the zigzags on her dress, flexed a foot idly in the sun.

Light shimmered in the trees, whose leaves, when the wind ran through them, sighed like gods after a long and boozy lunch.

She was reading the instructions that had come with her watch when her father called to inform her, for the second time that week, that not a single Jew had reported to work in the towers on the day they came down. But the writer did not call her again for many days. Alice slept with her phone next to her pillow and when she wasn’t in bed carried it around with her everywhere – to the kitchen when she got herself a drink, to the bathroom when she went to the bathroom. Also making her crazy was her toilet seat, the way it slid to the side everyday she sat on it.

Alice nodded; her pupils rolled back, and, after teetering for a moment, her body pitched slowly forward and to the side, like a discarded marionette. From here she journeyed many miles to remote countries with barbarous customs and maddening logic; she made and lost companions, spoke languages previously unknown to her, learned and unlearned difficult truths. When she came to some minutes later, struggling against a nauseating undertow that seems to want to pull her down through the center of the earth, she became remotely aware of machines beeping and tubes scraping the insides of her nostrils and too many seconds elapsing between the asking of questions and her answering them.

Her writing is peppered with insightful commentary.

The word for bank is the same, but the word for money changer is not, and while I have never learned the etymology behind this minor asymmetry I can imagine it represents centuries of cultural and ideological dissidence.

It is fortunately unfortunate that the novel has so much to do with Philip Roth. Ezra Blazer is essentially Roth in fictional form. Being unfamiliar with Roth’s writing will not take anything away from the novel, but being familiar with it will add another layer to Alice’s experiences.

Conventional structures are helpful when trying to understand what an author has written. Halliday purposefully avoids traditional tactics and creates an innovative novel where the reader’s mind may roam freely. This has its advantages and disadvantages. Whereas Asymmetry’s prose is lyrical and its characters singular, the novel feels more like an experiment than a polished piece of fiction.

That being said, the target audience – or at least the audience I believe would be most receptive to the book – are those interested in the literary world. Asymmetry is a reflection on the life of an aspiring writer, almost to the point where it feels to be a reflection on writing and art itself. Would the common reader relate to Alice? Would the reader relate to Alice’s insecurity and search for her muse through a relationship with a significantly older, established writer?

Disregarding these critiques, Asymmetry received a lot of buzz, and rightfully so. Halliday is a brand new novelist and came out swinging with a thoughtful and experimental novel that is well composed. Although I believe her experiment did not entirely succeed – as most do not – I enjoyed the novel and look forward to reading whatever she puts out in the future.