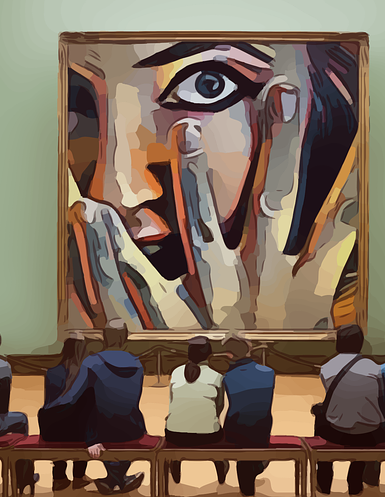 Image by prettysleepy1 from Pixabay

Read in The Best American Short Stories 2019 (to purchase)

In Kathleen Alcott’s Natural Light, a woman must reevaluate how she views her mother years after passing away. She unexpectedly comes across a lewd photograph of her in a museum in New York City. It shatters the “image” that she had formed of her mother over the years.

The woman narrates the story via a stream of consciousness. It’s difficult to follow her thought process at first, but gets easier as the story progresses. She has strong and insightful opinions and focuses on the motives and desires of the people around her.

After seeing the photo and trying to come to terms with it, the woman thinks of calling her ex-husband. She rejects that idea – as they ended their relationship poorly – and instead calls her father. When she describes the photograph to him, he brushes it off and says it must be of somebody else. The woman thinks back on her parents’ relationship and how normal it was:

Passing their room in the middle of the night once, I heard my father say, it must have been in his sleep, It’s the damn compressor, and my mother reply, without missing a beat, You bet your ass it is.

How could her mother – who was clearly a stereotypical mom – have taken part in such a lewd photograph? It doesn’t fit into the personality or image that she had created of her mother.

The story gets placed on the back-burner as Alcott builds out the narrator’s character. She is a professor, divorced, who is very critical of life.

There was always one student who hated me. This was a problem I could solve more easily with young men, pretending to lessen my authority while I sharpened my argument. But with girls it was never clear, for their hatred was much more original, multifaceted, and they clung to it even while enjoying whichever dialectic I’d introduced to distract them. They could entertain my line of reasoning while deriding the person beneath it.

Her marriage had gone bad for a number of reasons that she chalks up to differences in their personalities.

To this day I cannot look at a man who is looking at a map, for it recalls him so totally, how happy he believed in things reduced to their signifiers. At first he delighted in my missing sense of direction, asking me with wide eyes where I thought I might be going, but in the end it infuriated him…

But what pushed them over the edge, she believes, was her suicidal thoughts. Once she confided these thoughts to her husband a year after her mother’s death, she didn’t receive the support she was looking for.

Thought he was warm and soft when I first confided, the separative effect I had wished for, some congratulations I might receive for naming the thing that haunted me, did not take shape. Instead, my husband began looking for cohesion, seeing any dip in my feeling as proof of the roots the thoughts had taken in me.

Back to the photograph

The woman goes to see the photographer who took the lewd image. The artist describes the narrator’s mother, which only breaks apart the image of her even more.

The photographer watched me figuring out why this mattered. It was clear she had a way of encouraging a person’s natural state, even becoming a part of it, by goading on any reaction, turning the room to its expression.

She sends the photo to her father. He doesn’t respond. She sends follow up messages, but they show up as not delivered.

I had never known my father to turn his phone off, and in fact would have imagined he did not know how. He spent most of his truant feeling on it, revisiting the photos of cracks in the wall to be caulked, tapping at the weather icons of cities he’d visited once a long time ago.

Awhile later, he finally responds saying that he never expected this photograph to come back up.

He tells his daughter that he met her mother while they were both recovering alcoholics. He says she “still had some New York on her.” The daughter struggles to cope with this different perspective of her parents’ lives. They had kept it hidden from her for so long, and now she has to come to terms with it.

I wanted to believe that another conversation was happening inside the one I could hear, that maybe, in allowing my mother her life, protecting it from my revisionist inquiries, he was reminding me of the rights I had, the questions about who I was or how I suffered for which there were no categorical answers.

Although we tend to place people in categories – this person is this or that person is that – Alcott argues that we shouldn’t boil an individual’s personality down to a set of features. We are complex human beings that can change throughout our lifetimes.

We tend to look at people, especially those closest to us, as having a set number of characteristics. We shouldn’t. We should allow people the freedom to have stories and personalities outside of what they are to us. This doesn’t make them fake or untrue to themselves; it allows them to grow and explore the world around them, free from the judgement of others.

Alcott’s focus on characters – their motives, backstories, and desires – makes the text more of a rumination on an idea rather than a stereotypical “story.” How would you react if you came across something that makes you reevaluate what you think of those closest to you?