The Hand of Oberon

The Chronicles of Amber #4 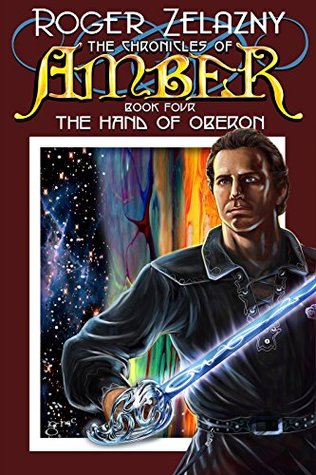 If someone does something really rotten, there is a reason for it. Learn it, if you care, and you learn why he is a son of a bitch. The fact is the thing that remains, though…Acts and their consequences are the things by which our fellows judge us. Anything else, and all that you get is a cheap feeling of moral superiority by thinking how you would have done something nicer if it had been you.

Middle-of-the-saga books are difficult to pull off. They must tie together a number of loose ends that the writer had previously created, develop characters, build a plot that captivates the reader, and ultimately create suspense for an upcoming climax to the series.

The Hand of Oberon manages to do all of this. Corwin discovers more about the Pattern, he grows and changes as a character, the psychological and physical battles between his siblings are gripping, and we are left with a surprising turn of events at the end of the book that will surely lead to this arc’s climax.

There are confusing elements of The Hand of Oberon that fall somewhat out of place. Some might be attributed to Corwin’s amnesia, while others feel like gimmicks or plot holes. That being said, these elements are small and do not take away from the core narrative that certainly makes me look forward to the fifth book in the series, or the final book of Corwin’s arc.

The Primal Pattern is damaged. I wish I could explain the difference between the Primal Pattern and the “Regular” one, but I’m not sure if it’s something I didn’t understand or Corwin simply is not aware of yet.

Corwin, Random, and Ganelon – Corwin’s friend from an adjacent world – search for what could have happened to the pattern. Ganelon spies something towards the center, and leaps over the pattern to retrieve a Trump card with holes punched into it. Corwin does not immediately recognize the person on the card, though he does look familiar. They determine that the holes represent a stabbing, and attribute a stain on the pattern to the family’s blood being spilled on it.

Corwin heads down to his old prison cell – the one that his brother, Eric, had left him in with his eyes gauged out after returning to Amber. He uses the Trump that Dworkin had drawn on the wall to travel to Dworkin’s chambers.

Dworkin believes that he is Oberon disguised as Corwin, so Corwin uses this to extract as much information about the true pattern as he can. He learns that the Jewel of Judgment can be used to redraw the pattern if it is correctly attuned to the bearer. He believes that one of his siblings is going to steal it from him and attempt to destroy Amber.

Corwin rushes into the Shadow world where he had stashed the Jewel in his compost heap. His neighbor – the one that is somewhat aware of the Amber and Corwin’s powers – says that the sibling had already been there. They rush to the compost heap to find that the Jewel is gone.

Tor has a great synopsis here of the whole plot – including spoilers.

As in the previous books, Corwin’s relationship with his siblings are difficult to understand. Their emotions seem to teeter on a knife’s edge, breaking out into brawls or death threats often. This gives the sense of an imaginary “court” of princess or princesses all vying for a throne, but doesn’t help me relate to Corwin as a character.

Of course, the reasoning around this could be that they are not really “humans,” and we shouldn’t attribute human characteristics to these characters. That’s fine, but it still does not help me to connect to Corwin’s character.

As I mentioned in the intro, a couple of confusing plot points crop up in this book. First, I didn’t find the Primal Pattern to be explained near thoroughly enough. I have a vague sense that the Amber they live in is a copy of the “real” Amber, kind of like the Shadows are a variant of Amber.

Second, both Benedict and Corwin travel to the Courts of Chaos, which are alluded to as being as important and intricately connected to Amber. We don’t get any insight into them really. Although it does help raise suspense, I wish that a few more hints were given.

Third, the griffin did not make sense to me. There are other fantastical creatures, so it’s not completely out of place, but it felt somewhat like a cheap gimmick. Somebody needs to guard the Pattern? A griffin will work. People love griffins.

The slow, somewhat confusing way the world is revealed to us through Corwin’s perspective can become frustrating at times. But his first person account is also part of the charm of the books. We are thrust into his shoes and have to determine what Amber is like, knowing full well that Corwin may not be a completely reliable narrator.

For all my concerns, I believe that The Hand of Oberon is a good addition to The Chronicles of Amber. This is especially the case when considering it through the lens of a typical, middle-of-the-sage book.

It’s intended to answer some questions that we had about Corwin’s past and Amber itself, while setting the stage for an important climax in the final book of this story arc. I greatly enjoyed it and look forward to reading the The Courts of Chaos.