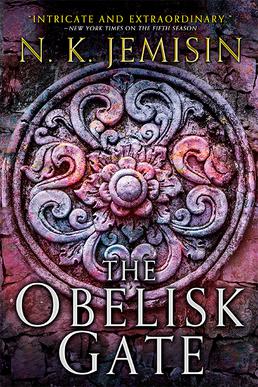 The Obelisk Gate is the second installment of N.K. Jemisin’s Broken Earth trilogy – a remarkable fantasy series that surges with intensity while making biting critiques on society.

Orogenes – a subset of humans that are born with the ability to manipulate the earth, or more specifically, particles of matter – are subjugated and oppressed by the larger society who sees them as dangerous sub-human creatures.

Guardians – a group of humans able to detect and counteract the orogenes’ abilities – seek out young, orogene children. Since orogeny is hereditary, the Guardians often kill a child’s entire family before taking them away.

Guardians bring these children to the Fulcrum – an institution that trains and controls them for the good of society. They are taught to use their abilities to stop earthquakes and prevent the coming of Fifth Seasons – a period of environmental turmoil that ravages the planet. Orogenes are therefore made to protect the very people that subjugate and control them. This power structure mimics the very, very dark sides of human nature that have recurred throughout human history.

The Obelisk Gate builds on top of the fantasy world that was developed in the first novel. It introduces more elements on the workings of orogeny, focuses on a new set of characters, and brings us on a thrilling adventure to understand what is really at stake in Jemisin’s world.

The story opens to the Guardian, Schaffa, fighting for his life underwater. At the end of the first novel, he had tried to take Essun’s child, which triggered her to destroy everything in her vicinity.

Schaffa is drowning underwater in the aftermath, until a mysterious voice speaks to him and lends him the strength to escape. He emerges as a completely different person, mentally altered by the near death experience.

Similar to the narrative shifts in the first book, the story then moves to Nassun – Essun’s adolescent daughter. It goes forward in time to follow her and her father, Jia, as they flee from their hometown.

This is just after Jia had killed the youngest son for being an orogene – something that consumes him about his daughter. Because she is merely a child, Nassun struggles between seeing Jia as her father and the man who brutally killed her brother.

Due to the world entering a new Season, Nassun and her father are all alone. They avoid talking about what happened back in town, and Nassun looks to blame her mother for it. This is a natural survival instinct, especially when we remember she is just an adolescent child. Nassun is at the hands of her crazed father in a world that is crumbling down around her, although she repeatedly performs orogeny – at the horror of her father – to save them from death.

Meanwhile, Essun bunkers down in Castrima – the comm (community) in a massive underground geode. She lost the ability to sess her daughter, so she decides that the comm might be the only place she could survive the oncoming Season. Besides, it is led by orogenes.

It turns out that Alabaster is also in Castrima. He is dying, being converted into stone every time he uses orogeny. A stone eater stands at all times by his side. He must teach Essun the nature of the obelisks before he dies, alluding that it will help end the Season that he started.

As the world descends into the new Season, Castrima must collect resources and hunt for food on the surface. When their hunters don’t come back for awhile, they notice their heads impaled on stakes at the end of their hunting grounds.

Another comm is taking over their lands and is preparing a siege on Castrima. Essun and Castrima’s leaders must defend it as Alabaster withers away and the Season grows more volatile.

During this time, Nassun travels with her father to the Antarctic. Jia had heard that they “cured” orogene children in a comm there. When they arrive, they find something else entirely.

The first book of the series was such an innovative piece of fiction, that it set a very high bar for the The Obelisk Gate. Although I was disappointed by some elements of this novel, the overarching concepts were thought-provoking, and the book was outright fun to read.

The concept of “bunkering down” in a fortress as an enemy of much larger numbers prepares a siege is a classic trope of fantasy. On top of that, Castrima must pull off “genius” tricks to thwart their attackers.

I don’t want to imply this is a bad plot, as it is thrilling all the way through, just that compared with the innovative premise of the first novel, this one falls more into the bucket of “typical” fantasy (the battle of Helm’s Deep in the Lord of the Rings is the classic example).

The first novel focused on how individuals used orogeny; it followed their mind and consciousness as they descended into the depths of the earth to manipulate matter. Many of the characters didn’t understand what they were even doing, so orogeny had a “mystical” feel to it.

In this installment, we learn much more about it. Nassun actually begins to see the material that makes up orogeny – a silver string-like substance.

I grew more and more excited about orogeny until, at one point, it was referred to as magic. Whereas before, the series could have landed somewhere in the middle between Science Fiction and Fantasy, it now leans more towards fantasy with the concept of magic.

I still maintain a hope that orogeny – which is now seems somewhat pseudo-scientific and pseudo-magical – might be defined in more scientific terms. There are references to past civilizations building tools to use orogeny, implying that there might be a scientific basis for it.

The Guardians also appear to be a group that acquires orogeny, meaning they are not born with it, like orogenes. I may be imposing by hopes too much at this point, but I do hope that it takes a turn for the more scientific.

The second strongest aspect of this book is its characters.

Schaffa is transformed from an evil, robot-like Guardian into a thoughful and complex character. Although we still don’t know if he is good or bad, it’s a stark contrast with the first book, where he is depicted as outright evil.

Whereas Alabaster and Essun were the strongest orogenes, that torch is now passed to Nassun. Her innate abilities surpass even those of her mother, and we can easily understand that she will be the focal point of the rest of the series. This is a welcomed transition.

What stands out among all other elements of this novel is the three-way war that is being waged. Whereas The Fifth Season focused on introducing characters, setting, and orogeny, The Obelisk Gate focuses on what is really at stake in Jemisin’s world.

Father Earth has lost its child. The moon – due to some event caused by a past civilization – was pushed out of its orbit, and is now orbiting earth in a much longer, elliptical path. The gravitational weight of the moon passing by the earth at speed causes the instability of fifth seasons.

Jemisin depicts the Earth as a being with a desire of its own: to regain its child. It fights to eradicate the humans and orogenes that caused the moon to change orbit. A faction of humans, orogenes, and stone eaters seeks to reestablish the orbit of the moon, while another faction seeks to destroy Father Earth.

Although it’s clear that a three-way war, or possibly even more, is being waged, it’s not clear who is on which side. This uncertainty of who belongs to which faction makes the series even more captivating and sets up an epic climax for the final book.

The Obelisk Gate is a thrilling read. I often have to work myself up to struggle through novels that fall in the middle of a series, but Jemisin’s writing and creativity is captivating. I can see how it won the 2017 Hugo Award for best novel.

I’m looking forward to reading The Stone Sky, the next and final book of the Broken Earth series.