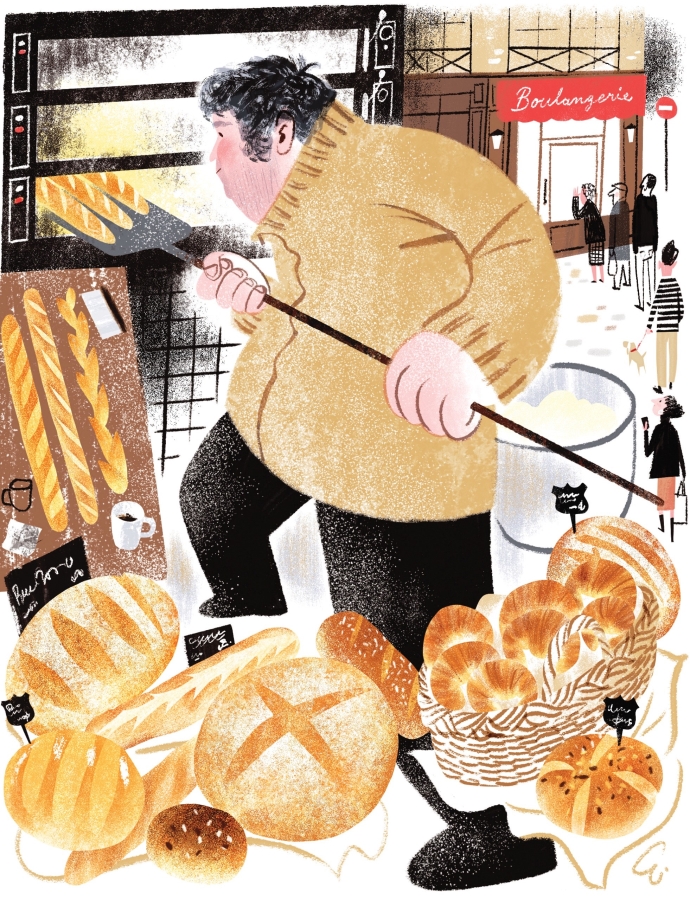 Baking Bread in Lyon is an endearing, personal memoir of Bill Buford’s apprenticeship in a small bakery in France. He heads to Lyon with his wife and children hoping to find work in one of the city’s top tier restaurants. Nobody takes him in.

After a month rejections, he turns toward a small bakery in his neighborhood owned by Bob – a friendly, disheveled Frenchman. Bob agrees to take him under his wing.

Bill’s writing is incredible. He depicts the process of baking bread as authentic, wonderfully quotidian, and a crucial part of Lyon’s culture. Bob is a character that I couldn’t even imagine in a work of fiction.

I may be biased. I enjoy baking bread at home and would love to open a small bakery one day in the future – using wheat from my own farm just around the corner. That aside, the memoir is masterfully written and focuses on a more general idea: the pursuit of a true, authentic life that is meaningful to ourselves and the community around us.

Bill arrives in Lyon – the “world’s gastronomic capital” – with his family. They get an apartment in an old quarter downtown. He captures the essence of an ancient, European city so well.

A gnarly first-century aqueduct column by a post office reminded us that the Romans had been here. In entryways, I found stone stairs rendered concave by boot traffic. Farther up the quai was a former monastery courtyard, overgrown but graceful. In our quartier, there were workshops, not shops: a bookbinder, a violin-repair person, a seamstress, a guitar-maker, a one-room pastry “factory.” The next street over, Arabic was the principal language, and women, their heads covered, fetched water by bucket from an archaic faucet.

He frequents a neighborhood bakery with his kids. They get to know the owner, Bob, who is a slightly overweight, jovial French baker.

After a month of being rejected over and over by restaurants, he turns to Bob and asks for a job in the bakery. Bob initially rejects him, but quickly changes his mind and takes Bill under his wing.

On his first day, Bill wakes up long before the sun rises and heads to the bakery. The kitchen is a disaster; it’s old, unorganized, and outright dangerous.

I looked around. On every available surface, there was an unwashed coffee mug. Fabric couches, used for shaping baguettes, were draped across wooden poles, like beach towels still damp from last summer. A light bulb dangled from the ceiling. There were the flickering blue lights of the ovens. The darkness put you on your guard. You could trip here and die.

Bob teaches him the fundamentals of baking bread. Bill – coming from a background of “high cuisine” – is used to exact measurements and directions. Bob’s process is anything but that. His recipe is based upon experience and intuition – years and years of baking bread everyday. Bill finds it difficult to follow along.

They head off for a typical, European breakfast at the cafe/bar across the street.

An off-track-betting bar opened at six. The coffee was filthy, the bread was stale, and the clientele might be flatteringly described as “rough” (phlegmatic one-lunged hackers knocking back sunrise brandies, while studying the racing odds), but, for Bob, they represented companionship.

I constantly found myself smiling at Bill’s spot-on descriptions of Europe, both its cities and people. He writes elegantly and comically. I kept find myself asking if he could cook as well as he writes.

Bill asks Bob what makes his bread so good – why his bread is considered to be the best in Lyon. He asks if it’s the sourdough starter, the fermentation, or the resting. Bob says that these are all important things, but they are not the thing that makes his bread good.

“Oui-i-i-i. But no. These are the ABCs. Mainly, they are what you do not do to make bad bread. There is a lot of bad bread in France. Good bread comes from good flour. It’s the flour.”

Bob gets his flour from small, local farms that grow and mill their own wheat. His family had been farmers, and he grew up understanding the importance of well-produced, local food.

We need to take note of this in America. We mass-produce so much flour and grain that isn’t native to the regions its growing in. Genetic engineering, fertilizers, and pesticides alter the quality of the ingredients that go into our foods.

There are tons of local farms that can provide us with wonderful resources. In a country founded on agriculture and the hard working farmer, we have grown too far from our roots.

It would be very difficult for a bakery to succeed without selling its bread to restaurants. When a baguette only costs one or two euros, even if you sell it to a couple hundred people a day, you would barely be able to pay the rent of the bakery, let alone your own housing.

Bob takes Bill out on his delivery route to show him the restaurant scene in Lyon.

Bob delivered bread via an ancient dinky Citroën that he hadn’t washed—ever. On the passenger seat were plastic sandwich wrappers, a half-eaten quiche, a nearly empty family-size bottle of Coca-Cola, and editions of the local paper, Le Progrès, that lay open at such specific spots as to suggest that this is what Bob did while driving: he caught up on the news.

Bob has his own opinion on each of the restaurants: “Exceptional food”, “Michelin-listed but not pretentious,” “twelve euros for a three-course meal.” Towards the end of the route, they sit at one of the restaurant’s bars.

Bob tells Bill what he thinks about “high cuisine.” He went to a three-start Michelin restaurant with his wife, but was disappointed. His life is all about food, but he thinks it should be at a reasonable value.

It wasn’t the food, which Bob doesn’t remember. “We were condescended to,” he said. Waiters sneered at them for not knowing which glass was for which wine, and served them with manifest reluctance. (Jacqueline is Cuban and black. That evening, there was one other black person at the restaurant: the footman, dressed up in a costume reminiscent of Southern plantation livery.) The bill was more than Bob earned in a month. It had been a mugging.

For all the authenticity that Europe portrays, it also has a dark side, which we get a glimpse of here. There are rigid class systems. Europes is well known for being left-wing, liberal, progressive, socialist, etc. But the truth is that the other side of the table is just as strong.

All good things must end

Bill finally decides to go to cooking school. For all the wonderful things he learned with Bob, he wants to try his hand at high cuisine – la grande cuisine. It was the reason he moved to Lyon in the first place. So, he heads off to school for a year.

They meet up again a year later and it’s like he never left. They go out to eat and Bob tells them all about his life: his family, his wife, his love for simple things. I couldn’t help but feel deeploy attached Bob, this French guys that I have never met.

Bill promises to cook for him – high cuisine without the pretentiousness that comes with it in Michelin start restaurants. Unfortunately, he isn’t able to.

Baking Bread in Lyon is one of the best memoirs I have read. Memoirs are not a category of writing that I actively seek out, but Bill Buford’s writing is outstanding. Immediately after reading the story, I started to order my flour from local, organic mills in my area.

Even if somebody didn’t care for baking at all, I think they would still find this story inspiring. Bill pursued his passions, fell short for a moment, but ended up with an experience that will stay with him throughout his life.

Of course, not everybody has the money to move their entire family to France. That’s alright, though. Life is about taking our experiences and considering those that other people have and piecing together our own picture of the world. Bill Buford has made a wonderful effort to show how important these things were to him; hopefully his writing influences and inspires many others.