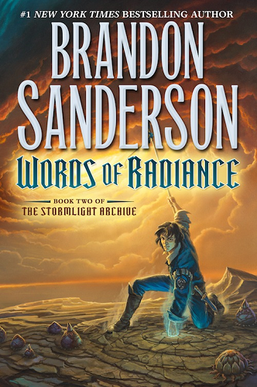 Epic fantasies have a special place in our hearts; they take us out of reality and into a world of its own constraints. Characters and events fit together as if they were pieces of a puzzle designed just for us. There might be endless choices, paths, or endings, but somehow fate manages to lead us towards a place that deep down, we anticipated from the very beginning.

Brandon Sanderson’s Words of Radiance – the second installment of The Stormlight Archive saga – is a valuable addition to the genre of epic fantasy. At 1088 pages, it’s a behemoth. And even though it’s surely one of the longest, well-known fantasy books out there, somehow we are left waiting on the edge of our seats for the next one. You would think that after 1088 pages, you would grow tired of Sanderson’s voice, but his story and characters are too enticing to let go.

In a similar way that The Way of Kings followed Kaladin in the discovery of his powers, Words of Radiance follows Shallan in the discovery of hers. As we learned about Kaladin’s youth through flashbacks in the last book, we now learn about Shallan’s. Her flashbacks reveal the household she grew up in, as well as the struggles and pain she endured as a young girl. We had previously learned that her family’s financial problems forced her to try to steal Jasnah’s Soulcaster, but as her past is revealed, we learn that there is much, much more.

Even though Jasnah had caught Shallan trying to steal her Soulcaster, she still decides to keep her as her ward. She sees something in Shallan that is important to her. Shallan is grateful for this – and not to mention that Jasnah has organized an informal betrothal between her brother, Adolin, a highprince of Alethkar, and simple, destitute Shallan, the daughter of a minor house of Jah Kaved.

On their way to the Shattered Plains – where Dalinar and the Alethi armies are still skirmishing for gemstones with the Parshendi – their boat is attacked. Jasnah is stabbed and is presumed to be dead. Shallan goes down with the boat but washes up on land. She finds her chest not far away and, fortunately, comes across a traveling caravan that takes her in. She convinces them to take her to the Shattered Plains, taking on the authoritative and regal air of Jasnah.

As they travel across a barren desert, they are hunted down by marauders. This is where Shallan starts to become fully aware of her powers. She uses them to persuade a band of runaway soldiers coming from the Shattered Plains to return there with her – guaranteeing their acceptance back into Alethi society if they accept. The soldiers initially worry she doesn’t have the authority to pardon them, but soon come to see her powers and agree to turn back with her.

Meanwhile, in the Shattered Plains, Dalinar is growing frustrated with the useless skirmishes that the Alethi armies are relentlessly participating in. He is taking more to the Codes, which the other highprinces – like Torol Sadaes – find to either be a weakness or a clever ploy for Dalinar to assume more power. His reputation as the Blackthorn is being tarnished, something that he is fine with, but that his older son, Adolin, is trying to understand.

Tensions grow between Dalinar and the highprinces as he begins having frantic convulsions during highstorms. He sees visions that tell him a Desolation is coming and that he must unite the kingdoms of Roshar to prevent it. When he wakes, glyphs are found etched into stone walls counting down the days to an impending doom.

Dalinar questions his sanity, but soon realizes that his failure could mean the return of the Voidbringers and the destruction of Roshar. He needs to unite the kingdoms. But he cannot even unite the highprinces within his own kingdom first. He realizes that, in order to convince the highprinces, he must play their games. So, he uses his son, Adolin, as his chess piece.

Adolin, of course, is happy to aid his father in any way possible. At first, he was wary of his father’s visions. Eventually, he becomes convinced of Dalinar’s sincerity and realizes that loyalty to family is more important than all else. He engages various highprinces in duels to win their Shardblades and force their hands to follow Dalinar. The ultimate goal is to lead a coalition of Alethi armies deep into the Shattered Plains to the heart of Parshendi civilization.

Kaladin has managed to transfer Bridge Four away from the dangerous clutches of Sadaes into Dalinar’s army, who refuses to send bridgemen on death runs. He is impressed by Dalinar’s reputation and wants to trust him enough to reveal his powers. He remembers Amaram’s deception and his general distrust for all lighteyes. Syl becomes less “silly” and pushes Kaladin to assume more responsibility and to become who he needs to become.

I simply can’t believe how much was fit into this book. It shifts between character perspectives and locations to build a world with enormous possibility. Much of what we were introduced to in the first book is laid out in more detail here, while also leaving enough uncertainty and suspense to lead us to the next one.

I will hold off on judgment for the time being; the second enormous, book in an enormous saga leaves too much out in the open to critique offhandedly. Of course, there are many times in the book where it feels slow or overly detailed, but that comes implicit in the type of saga that Sanderson is writing. If you get frustrated with detail for the sake of imagination, this saga might not be for you. But if you like to sit back and enjoy being brought on a journey into another world, Words of Radiance delivers.