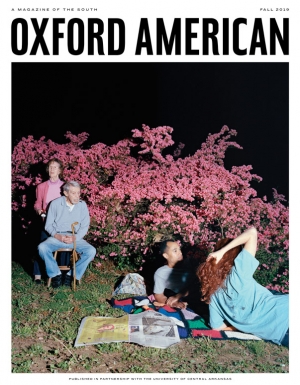 The opening story of The BEST American Short Stories 2020 is Selena Anderson’s Godmother Tea, published by Oxford American. It’s a story of a young woman – in her mid or late twenties, most likely – who is struggling with a deteriorating friendship and lingering desires for an ex-boyfriend.

It blends elements of magical realism with a sort of stream-of-consciousness narration. The narration is much clearer than Faulkner’s writing in The Sound and the Fury or Morrison’s writing in Beloved for example, but there are certainly characteristics of a narrator getting lost deep in their own thoughts. Anderson uses this technique to convey the insecure, judgmental, and nihilistic personality of her protagonist, which can simultaneously be disheartening and comical.

I live down south in a city whose economy probably should not have outlasted the twentieth century, although folks around here celebrate this accident as proof of their regional superiority.

The narrator, Joy, just received antique furniture from her mother that had been passed down through the family. She places it, unwillingly, into her small apartment where it doesn’t really fit in. Among the most egregious pieces is a large mirror through which Joy thinks her ancestors are watching her.

One night as she is preparing dinner, the electricity goes off in her apartment multiple times. She takes this as a sign that one of her ancestors is trying to communicate with her. So she brings out a chair where the ancestral “Godmother” is brought into the real world.

The Godmother, a sweet, older woman we’d all wish we’d had growing up, starts whipping up dinner for Joy. She also wants to hear about Joy’s problems, which are twofold: her best friend friend is slowly not becoming her best friend anymore, and she has lingering emotions for her ex-boyfriend who’s with another girl.

As you might guess from her supernatural aura, the Godmother is wise and hopes to give advice to Joy.

“You’re tired of living,” she said, drawing a cigarette from her pocketbook, “because something has tricked you into believing that life is long.”

“Absurd.” I scoffed like a lifelong scoffer. “My beliefs don’t trick me.”

“That would make you very different from other people.”

The rest of the story consists of Joy confronting her two problems while heeding the advice from the Godmother. She is helplessly insecure and nihilistic at first, but the support from the Godmother helps her take on these issues head-on.

It took some time for this story to grow on me, and it was certainly Joy’s character that made it happen. She reminded me of my past insecurities, struggling to get by while dealing with the issues I had made worse due to my own actions. I especially appreciated Anderson’s off-topic comments that paint a vivid picture of Joy:

I picked out a dress that I used to love because it was orange and had only cost me seven dollars.

The elements of magical realism made the story into something memorable; I could imagine her family members having sat in front of that same mirror with their own issues in life. Understanding our family and where we come from is an important process of confronting the problems we face in our own world, and using that as a source of strength is how we can find contentment and meaning in our lives.