The False Promise of Liberal Order 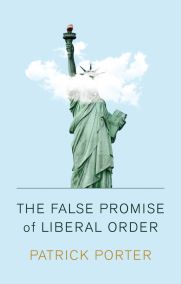 Buy from the publisher Polity Books (through Wiley.com)

Ask most Europeans following WWII if they believed the United States helped bring peace, order, and stability to a war-torn continent and you were more than likely to receive a positive response. Ask most Europeans today – after the Vietnam War, the Korean War, American geopolitics in Central and South America, the Cold War, Afghanistan, Iraq, Libya, Syria – and I’d wager most anything that you’d receive an entirely different response.

What could have changed so drastically in a country that, before WWII, was largely isolated from the rest of the world, a republic founded on principles of liberty and justice? Could it have been its belief in American exceptionalism, propelled by a surging economy, that led it to “order” the world in its own image? Or could it be the imperialistic tendencies of human nature that brought a country out of its isolation to build a vast empire across the globe?

In The False Promise of Liberal Order, Patrick Porter looks to answer these questions and analyze why the world seems to be falling in a state of disorder (or if we should actually believe this thesis). What he calls the panegyrics of the liberal world order – those who believe the United States has the responsibility to maintain an order based on “freedom, consent, and equality” – point to the rise of authoritarianism and the decline of democratic values as the beginning of the end to peace and prosperity.

To them, the ordering power was not an empire. It was a more benign ‘hegemon’, a word drawn from ancient Greek to mean ‘leader’. For the first time, according to this orthodoxy, the most powerful nation on earth forsook imperial aggrandizement, instead using enlightened measures to make a world safe for market democracy in which people could find emancipation.

The world’s perspective on the United States as the global leader is changing, and has been for many years. Today, within its borders, a semi-demagogue holding probably the most powerful office in the world and claiming the mantle of democracy and freedom, spewed blatant racism and false claims of election fraud. A riot of white Americans stormed the capital building, refusing to accept the outcome of an open election.

The world now questions whether the United States is truly bringing peace and prosperity as it claims to, or if it’s simply pursuing its own imperialistic goals to maintain itself as the global hegemon. This is more than reasonable given recent history. But believers that the United States must maintain its global leadership see its role as necessary.

It was better for the world that America became the dominant power, rather than its totalitarian competitors, even if the exercise of that dominance varied in its wisdom. As hegemonies go, America’s was the least bad by a decisive margin.

Most any reasonable person would agree with this. Would we have wanted a world built on Lenenist order, or even more sinister one, based on Nazi order? The answer here is a resounding no.

Porter concedes that it was certainly the “least bad” option, but now asks if it is still the least bad option. Has the world achieved a stable order that would allow it to break its dependency on American hegemony? We cannot assume, for any good that the US did as the global leader, continues to this day. Porter warns, “to rewrite this history as an ‘arc’ of progress, or an ‘arc’ of anything, is to repeat the hubris that got us here.”

In fact, Porter argues that nostalgia and a decent amount of propaganda have created an illusion of a fraying order. He writes that “the exaggerated notion of the liberal order and its imminent collapse is one of the myths of empire that helped create the current crisis” – meaning that the belief we are on a precipice of disorder is propaganda that the United States, as an imperialistic hegemon, uses to justify and perpetuate its reign.

I think that Porter personifies the United States as a human actor too much. It’s easy, as it is with populists politicians, to point to an elite or global cabal of people and say “it’s all their fault, they are purposefully deceiving us.”

In reality, I think it’s important to de-personify the foreign policy of the United States. Of course there are actors who wish to propell the United States as the global hegemon, but the percentage who do so for power and glory is much less than those who actually believe in its righteousness. I’m not implying it’s good to do so, but I think over-simplifying the situation by personifying foreign policy falls into a populist trap that we shouldn’t go down.

A note on Porter's writing

Porters writing is emotional. That’s understandable; he’s trying to break down the false nostalgia that we have about America’s “order.” But his writing often seems over the top. He uses far too many adjectives. It makes the book sometimes feel like a mix between academic jargon and ranting. See the following passage as an example:

Precisely because of the unswerving belief in the order’s decency and soundness, panegyrics offer shallow accounts of the crisis. They serve up glutinous reassurances, that the order has all the answers to its own problems, that what is ‘wrong’ with the order can be fixed with what is ‘right’ with it. The order’s defenders offer technocratic remedies: refined institutions, fresh messaging or creative new programmes. If the order is perishing, it cannot be due to its own internal flaws. It is being assassinated, after being made vulnerable through neglect. This dictates unpromising responses, whether to write the order’s obituary, blame ‘defeatists’, or preach for its revival in the hope that the disillusioned will return to its banner. If the world is changing as profoundly as nostalgists believe, we need inquest, not exoneration.

I don’t say this because I disagree with his overall argument, which I believe is a very good one, but because it’s just so hard to get through at times. In this passage allone he uses: precisely, unswerving, shallow, glutinous, technocratic, refined, fresh, creative, assassinated, unpromising, disillusioned, profoundly…This vocabulary is too distracting. Simplicity would help convey his message much clearer.

The target here is the proposition of liberal order. This is not the same as liberalism, a rich tradition that is continually remade. Liberal order is a suggestion about how a dominant power organized, and can organize, the world. I argue that the concept is a self-contradiction. The world is too dangerous and conflicted to be ordered liberally, and overstriving to spread democracy abroad will destroy it at home.

In the modern world, we have the belief that “autocratic and militaristic states make war; democracies make peace.” In reality, it’s clear that the United States, previously one of the world’s most exemplary democracies, makes war, not peace.

The argument is that war is justified to prevent autocracies that would make the order unstable. A strong hand early will prevent worse consequences down the line. But as is clear from history, Spain is a great example, the United States has specifically backed autocracies for it’s own advantage and goals.

The contradiction that Porter wants to show here is that the United States is a democracy; that is undeniable. But its foreign policy is not democratic. It seeks to intefere with foreign democracies with the justification that it has the right to do so in order to secure peace and prosperity for its citizens and allies.

What has happened in the past century is that this contradiction has created an “unraveling” in the nation’s psyche. It’s clear we are a democracy – just look at the politicians that I elect and the freedom that I have as an individual – but it’s also clear that we meddle and interfere with sovereignty across the globe. Better yet, this is done without my tax dollars, and without my approval. Porter writes,

Projecting power to achieve international order has had domestic, illiberal consequences like the increase of state power and the unbalancing of the constitution. Two decades of war have frayed American liberties, institutions and solvency.

The War on Terror, and many of the “counter-insurgency” efforts that the Department of Defense has undergone, have not needed to pass through Congress. These acts of warfare, often through “remote” devices such as drones and airstrikes, reduce American casualties but cause a contradiction with our ideals of self-governance.

I disagree with them, as do many people around me, but we do not have the power to stop them. Foreign policy has become an undemocratic institution, and too powerful for ordinary citizens to stand up to.

Unfortunately, Porter’s book does not bring us solace. That is not his fault, but more that this problem is much greater than any single book could solve. He writes:

Critical literature strives for emancipation. By exposing the affectations of ‘order’ arguments, [] seeks to add intellectual fire to the movement so as to turn the world away from imperialism and raison d’etat, and to build a new humanist order. By contracts, this book does not. In the tradition of classical realism, by stripping away euphemism, it seeks less to transform than to reveal the hard-wired realities and constraints of an anarchic world, the hard trade-offs it imposes

This is a packed passage, but what I took from it, as well as from the rest of the book, is that Porter doesn’t actually disagree with a liberal world order (as most of us do not, in theory). Instead, we need to remove the mythology of the United States as a liberal and just leader, and reveal its role as that of an imperialistic hegemon. Removing the aura of “perfection” will allow us to critique its imperfections and build a better world where democracy really can thrive.

To keep this review short, I will break out analyses of individuals chapters if I get the chance. The chapters are the following:

Although The False Promise of Liberal Order was well researched, had strong arguments, and was good to read, I wouldn’t recommend it to people. It’s too difficult of a book to wade through, and too filled with emotion and jargon. It’s just not easy to say “this is a good book, you should read it.”

However, if you are interested in these concepts, especially critiquing the United States’ role as the global hegemon, this book will fit well into your repertoire. Those who adhere to this argument may like the emotion that Porter put into its pages.

I am glad to have read The False Promise of Liberal Order, and think highly of Porter as an intellectual. But there are a lot of elements that make this book tough to read. I would recommend making it more concise, removing the reliance on adjectives, and certainly eliminating some of the emotion that takes away from his logical arguments.