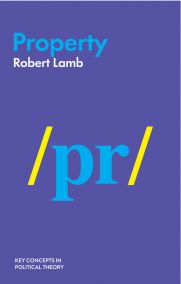 Buy from the publisher Polity Books (through Wiley.com)

Property is an installment of the series Key Concepts in Political Theory published by Polity Books. Robert Lamb – the author and professor of Political Philosophy at the University of Exeter – writes in the introduction: “the question that we will address is why private property?”

He approaches this question by first taking a shot at defining property itself. Is it the exclusive use of something? How do we decide who owns something? Is it the first person to claim it, or does it depend on power dynamics? Can it be inherited and passed to others?

Simply by rattling off a few questions, it’s obvious that property is a more complex concept than we may consider at first. Lamb decides to take another path: he first reviews the arguments against private property – mainly from socialist and anarchist theorists – and then proceeds to review the primary arguments in defense of it – including libertarians, theologians, utilitarians, and ultimately philosophers in the liberal tradition.

By the end of our exploration of theories of property, I conclude that private ownership can ultimately be justified, though not via the arguments pursued by many of its most ardent cheerleaders.

A reader’s evaluation will most likely depend on the perspective they had coming into the book, since I think Property is more of a clarification and articulation of current concepts than it is an attempt to persuade. I came to the book for three main reasons.

The first is that I’m interested in modern democratic socialism – not the 19th and 20th century versions of communism and socialism (at least for real politics, not historical study) – but rather how government regulation can work with markets to provide freedom and fair opportunity to its citizens.

The second reason is that I am baffled at the arguments for libertarianism. I wanted to understand why private property and personal freedom are the ultimate ends and rights that cannot be infringed upon. Not only does this view of government clash with my own, but it also seems to be on the rise throughout the United States.

The third reason is that I just obtained my first substantial form of private property! I purchased a small apartment and am looking to buy a modest plot of land for amateur farming. While going through the paperwork, I was constantly thinking about why I was justified in making this purchase, and what rights allowed me to do so.

In the end, Lamb’s review of private property is an excellent one. It wasn’t exactly what I was looking for – I was naively looking for something more absolute – but Lamb succeeded in convincing me that the idea of property is political in nature and we can only approach it within a given context.

The greatest questions in this world simply can’t be answered outright. Lamb does a great job at reviewing how people have approached thinking about property in the past, as well as giving his educated opinion on what are the best answers for his question: why private property?

If you read and enjoyed Property, or you are generally interested in these philosophical questions, I’d recommend American Pragmatism by Albert R. Spencer also published by Polity Books.

Definitions to keep in mind

We need…to establish exactly what private property is. We need to get a proper grip on the meaning of this key concept before we can justify (or criticise) it. This task is not a straightforward one. The distinction between conceptual explication (what property is) and normative justification (why property is valuable) is a potentially slippery one.

A slippery one indeed, and a distinction that could alienate some readers. Simply put, Lamb takes the stance that there is no way we can define property in isolation.

Questions about the meaning of private property thus inescapably intrude on questions about its fair distribution. In doing so, they invite consideration of other political concepts, such as freedom, justice, and equality…

Property exists only within the context of other concepts. It is not subservient to others – the relationship between freedom and equality does not define property, for example – but it certainly influences and changes the rights we associate with it. This leads Lamb to clarify how he approaches the analysis of property: through its conceptual core or historical nature.

Some readers, myself included at the beginning of this book, may want an objective definition of property. This desire stirs up a classic philosophical conundrum: can anything be objectively defined?

Lamb thinks that hoping there are universal facts about property we can point to justify it is a fool’s errand. He says:

Despite its intuitive pull, however, the view of property as having an essential conceptual core – whether defined by exclusive use or anything else – has fallen into some measure of scholarly disrepute in recent years.

He goes on to say that “the very notion of property as a singular object of study is a product of mistaken, mystified thought.” If you are like me, this is where you might question continuing on with the book. I was looking for a conceptual core explanation, some unique attribute of private property and it’s relationship with human nature or the natural world that would justify it.

Instead, Lamb informs us that’s somewhat of a naive thought and takes us down the road of various historical theories of property. If you are willing to take on this task, a conceptual core actually does appear. By placing our modern perspective of private property into a historical context, it’s clearer that we developed our current institution of private property. We may have to be content with the fact that property is not some natural right, but a result of society and simply the-way-things-are.

My ultimate conclusion is that private property can indeed be justified as a social institution, but its value as a concept is articulable and appreciable through an overall normative philosophical framework, rather than in isolation. To reach that point, we need to embark on quite a journey.

Quite a journey it is, but Lamb does very well at simplifying the theories of various philosophers and relating their ideas to the modern world. With a bit of patience and attention, a comprehensive view of property will emerge at the end of the book.

To keep this review short, I will break out the analysis of each chapter into a separate post and update with links when they are available. The chapters are the following:

Even though Lamb’s Property didn’t give me the morale absolutes I was looking for before picking it up, it opened my eyes to a complex debate and presented me with different ways of thinking about my questions.

He does, however, seem overly confident in his defense of private property. I’m sure a large number of people will agree with his analysis that Rawls’s theory of Property within Justice and the work that has come out of it justify private property as an institution.

To me, it seems there are still too many issues left unanswered related to fair distribution and opportunity. I won’t even go into the unjust acquisition of property in the case of colonialism and imperialism and what that means for the concentration of wealth (and therefore property) in the modern world.

For the casual reader, I would not recommend this book simply because it dives a little too much into the academic, historic, and philosophical nature of the argument. That is not something negative towards Lamb or the book, just how to classify it for different groups of readers.

I believe those interested in academia and philosophy in general – whether an amateur want-to-be philosopher like myself or one with real academic experience – will find this to be a very good book well worth picking up.