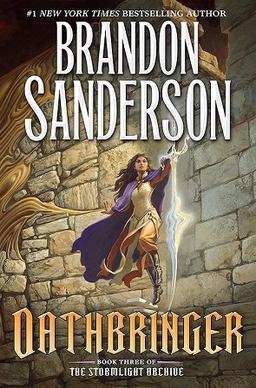 The third installment of Brandon Sanderson’s Stormlight Archive reveals Roshar to be not the sole property of ordinary humans, but the eternal battlefield of gods and their legacies. The question still remains: do humans have free-will in this world or are they merely pawns in a larger struggle for power?

Similar to the previous books, Oathbringer focuses on the development of a Radiant. The Way of Kings followed Kaladin on his journey to discovering his powers, Words of Radiance followed Shallan on hers, and Oathbringer follows Dalinar Kholin on his.

Oathbringer introduces Odium as a pivotal character, brings the reader deeper into Shadesmar and the world of Spren, and brings Dalinar’s secondary characters – Adolin, Navani, Bridge Four, the Assassin in White, etc. – more into the mix.

In complete honesty, Oathbringer kicks off slowly. It’s hard to tell if it’s the sheer length of the book that makes it difficult to get into (settings and descriptions are much denser than more “typical” books), or if Sanderson’s writing is not as captivating as it was in the beginning of the saga. Maybe he assumes that if we are still around for the third book, we are in it for the long-haul. He wouldn’t be wrong.

Some descriptions are overly descriptive and some metaphors are wordy and out-of-place, until you get into the rhythm of the book. This may be less of a critique of Sanderson’s writing than it is of a common trope of modern fantasy: many writers speak in the jargon of the world they are building.

Everything from swear words to jokes and metaphors rely on implicit knowledge that we are supposed to accept as part of the fantasy. Although it’s supposed to immerse us in the world, I often find that it jolts me out of the writing. It can often come off as a sort of gimmick.

Once these smaller elements are internalized, Oathbringer is a fantastic read. Sanderson pulls us into the mind of his characters, making us feel deeply attached to both their strengths and weaknesses. We root for them to either succeed or hope they will fail in their journeys.

Similar to the structure of the previous books, we get flashbacks about Dalinar Kholin’s past. In his youth, he was far from the man that we have come to think of him as. This is a crucial part to all the Radiants: they have a dark side to their past that they managed to overcome.

Dalinar is referred to as the Bondsmith, a Radiant who has the ability to bind the others together. It’s unclear exactly how this works, other than the example of being able to speak any language when in physical contact with someone.

Dalinar does not wield a Shardblade like the other Radiants, whose spren will form into whatever shape they need at the time. The Stormfather, the most powerful spren that we know of, refuses to become a tool like this.

Oathbringer makes Dalinar seem to be the most important piece of the puzzle. However, we have to remember that the same was for both Kaladin and Shallan. The fact that the saga has focused on a specific Radiant each book, and that there are 10 planned books and 10 heralds, does not seem like a coincidence. My completely speculative suspicion is that the characters in each of these books might come to replace the heralds.

The prospect that the following books reveal or follow new characters – or at least characters that we don’t fully understand yet – is a good one. Character development is Sanderson’s strength. Although sometimes Kaladin can seem too predictable or Shallan somewhat mechanical, it’s impossible to deny that we care for them. The same goes for Dalinar; whereas I didn’t love reading his sections in the previous books, now I am captivated by his story.

Dalinar has a series of flashbacks that show how he came to be known as the Blackthorn. He was a ruthless commander, fierce on the battlefield and unwavering in his support for his brother. The side of him revealed in these flashbacks show why the other kingdoms are so wary of his advances towards peace, and why Torol Sadeas – before his death – was so concerned about his shift towards the Codes.

Dalinar also comes to remember his wife, Evi, who is the mother of Adolin and Renarin. Before, he could not remember anything about her, and would only hear whispers whenever her name was spoken. But little by little, his memories come back – and we learn that her death was his own fault.

He reflects on the conquests that his brother, King Gavilar, sent him on. Dalinar alone could be sent to sway the tide of a battle. We learn that his strength came primarily from the Thrill – the sensation of war and violence that grips many humans.

It grips Dalinar more strongly. The Thrill pushed him to have superhuman strength and grit, and is an important element in the final battle of the book.

As his memories come back, so does another dark part of his past: alcoholism. We learn that even though he now has a good relationship with Adolin, that was not always the case. His relationship with Renarin, the younger, weaker brother also becomes more apparent.

Meanwhile, Kaladin, Shallan, and Adolin are sent away to protect Kholinar from the Parshendi. They come across one of the Unmade in Kholinar, and are forced to head back to Urithiru through the Oathgates.

Somehow, they are sent into Shadesmar and must traverse the world of spren to make it to Thaylen City, which is under siege. Kaladin sees a vision that Dalinar is in deep danger and they must get back in time to save him.

Oathbringer is a good edition to a very good fantasy saga. I still don’t place The Stormlight Archive among the giants of fantasy (Lord of the Rings, The Wheel of Time, etc.), but it is definitely making its way there.

One of the themes that I would change is the constant success of Sanderson’s characters. Their pasts are filled with darkness and failures, sure, but the current story line is riddled with success after success until it feels somewhat predictable. Even if the characters hit something difficult, they seem to get through it. For the sake of the story, I hope that is not the case all the way through.

It is difficult to judge a saga before it is revealed in its entirety, so I will be patiently waiting in the years to come. The very least that we can expect is a slew of fascinating characters to keep us entertained and an epic final battle to keep us on the edge of our seats.

Sanderson masterfully finished The Wheel of Time for Robert Jordan and I expect he has something similar in store for his own epic saga. I’m looking forward to cracking open Rhythm of War, which Tor Books just published back on November 17th, 2020!